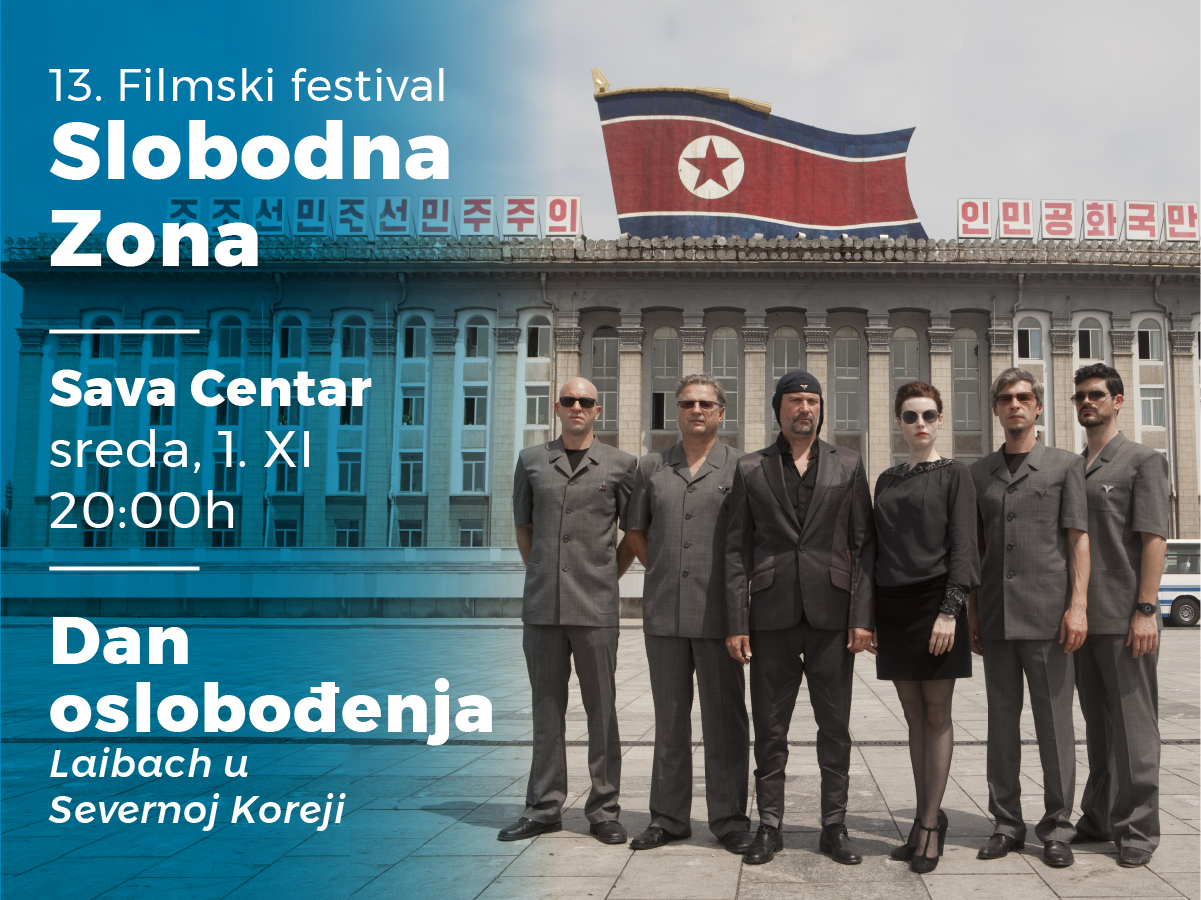 This year the Free Zone Film Festival will take place between November 1st  and 6th  in Belgrade, Novi Sad and Niš. On Wednesday, November 1st ,in Centar Sava, „Liberation Day“, a film directed by Ugis Olte and Morten Traavik will be screened at the opening of the festival.

Traavik, a theatre director, conceptual artist, cultural diplomat and a big fan of the band Laibach, in August 2015, managed to do the unthinkable– on the occasion of the celebration of 70 years since the liberation of North Korea from Japanese colonial rule, he mediated, negotiated and organised (!) the first concert of a western band in Pyongyang, the capital of one of the most isolated countries in the world. And that’s not all – he even managed to make a documentary film about this incredible adventure. Members of the cult Slovenian band Laibach who were given the honour of playing on one of the most important dates in the history of North Korea are followed by a film crew who record rare and precious moments behind the scene of „the last communist dictatorship“.

Morten Traavik and Ugis Olte go where not many have been before them and in a surprisingly subtle way record the clash of ideologies and cultures and an attempt at establishing a true contact between the members of ex-Yugoslav art rock band and their hosts. What connects them is the Hollywood musical „The Sound of Music“, which is still very popular in both North and South Korea. This amazing venture has almost everything standing in its way: the reputation of the band Laibach, language, technical difficulties, untold prohibitions and censors that are always awake. But in spite of the absurdity of the whole situation (or rather because of it), a lot more than a cultural exchange is going on in front of the audience. Laibach’s big hits, such as Life is Life, Across the Universe and The Sound of Music get new meanings while colliding with a new and unknown world that the film opens before us. Morten Traavik says at the beginning of the film: “I don’t care about peace, I care about the truth. The truth is unpleasant, it pinches you and it brings changes.” For both sides. And while the propaganda war between North and South Korea culminates in the spring and summer of 2015, a war waged by huge loudspeakers directed across the border, one of the most controversial bands of Western Europe is playing in the biggest and most beautiful concert hall in the most mysterious country in the world. Their motto is: “ALL ART IS PROPAGANDA (George Orwell)… AND ALL PROPAGANDA IS ART (Laibach).”

The result is an ironic, funny and engaged documentary musical that speaks more than a thousand words about North Korea and Laibach. The hills have come alive with the sound of music! See for yourself.

Free Zone has some new people in the selection team this year. Young authors, film editor Jelena Maksimović and director Ivan Bakrač have chosen 10 feature films for regional selection, and in the international selection 15 movies, chosen by Branka Pavlović, Free Zone’s long time selector, will be competing for jury prize. Another novelty is a selection of 12 short films in the regional program. As usual, the audience will get to see five films in the 14+ selection. There’s also an abundant accompanying program: five special screenings, Master Class, Late Night Conversations and day speaking program Coffee with the Author.

This year’s edition of Free Zone Film Festival includes over 40 fiction and documentary films, both shorts and features, from all around the world.

The 13th edition of Free Zone Film Festival has been supported by the Ministry of Culture and Information of the Republic of Serbia, Reconstruction Women’ Fund, French Institute, Secretariat for Culture of the City of Belgrade, Canadian Embassy and Embassy of the Kingdom of Norway in Belgrade.

See you in Free Zone!