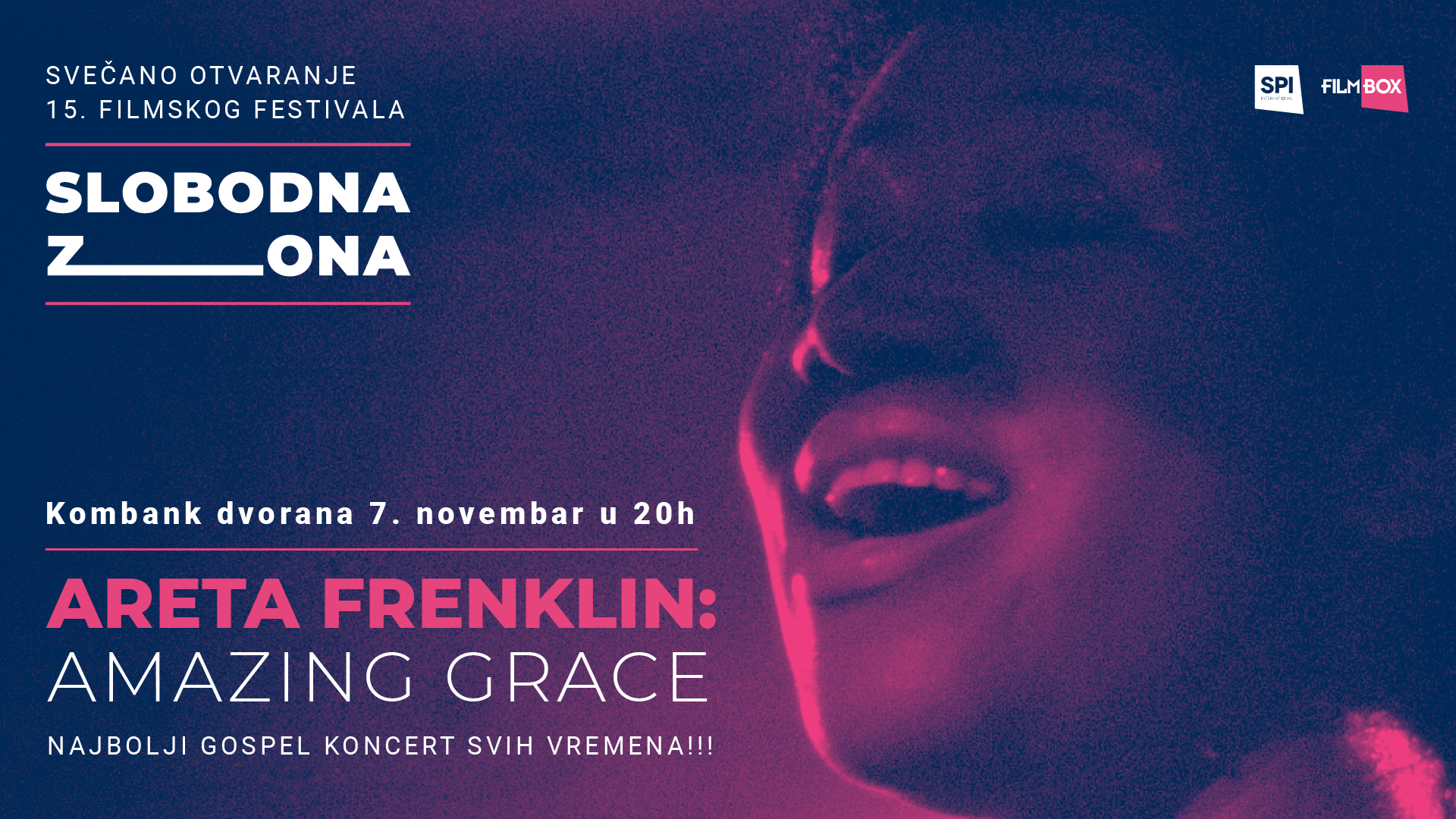 The fifteenth jubilee edition of the Free Zone Film Festival will be held from November 7th to November 12th, 2019 in 7 cinemas in Belgrade, Novi Sad, and Nis. The festival officially opens the movie Aretha Franklin: Amazing Grace on November 7th at 8 pm at Kombank Hall.

At the height of her fame in January 1972, Aretha Franklin decided to return to where she began, in the world of gospel music. In just two days she recorded the album Amazing Grace at New Temple Missionary Baptist Church in California with the James Cleveland Church Choir. On this album, among other things, Franklin sings songs like “Aint No Mountain High Enough”, “Have I Got Over”, “Precious Memories” and an 11-minute version of “Amazing Grace”. The result is amazing as expected from the soul queen, and this album remains to this day the best-selling gospel album of all time. The documentary about filming the album waited for 46 years to see the light of day. The filmmaker Sidney Pollack forgot to use clapperboard, a device used to synchronize sound and image and was never able to synchronize the recording due to the analog technique. Aretha Franklin, who already had 31 songs at the top of the US charts, did not allow this movie to be shown. Alan Eliot took over the project and in 2008, with the help of digital technology, with a team of technicians; he was able to synchronize image and sound. Approval to make this documentary came only after the death of Aretha Franklin, by her niece Sabrina Owens.

Within the Regional Competition – Balkan Horizons on November 11, the Serbian premiere of the controversial Croatian film Diary of Diana B., directed by Dana Budisavljevic, will also be held at Kombank Hall.

This is the true story of Diana Budisavljevic, a humanitarian and activist from Zagreb who organized an action to rescue and take care of Serbian children from Ustashas camps during World War II. Using her Austrian descent, Diana called on the authorities, the church, and the Red Cross to rescue at least the children from the camp. After they were taking no responsibility, she decided to organize an action from her apartment that saved more than ten thousand children by the end of the war! During a visit to Jasenovac in 2010, director Dana Budisavljevic receives from the then head of the memorial center Diana’s diary, which is a record of the almost unknown heroism of Diana and her friends and decides to make a film based on it.

Dana Budisavljevic was born in 1975 in Zagreb. She graduated from the Department of Film and TV Editing at ADU in Zagreb. She made her debut with the documentary Sve 5! and became more popular with the family film Your Life is not a Hawaii Song, which aired in the Free Zone 2012.

During the festival in Belgrade, screenings will be organized in five halls – Kombank Hall (formerly the House of Trade Unions – Opening Ceremony and the premiere of the film Diary of Diana Budisavljevic), Belgrade Cultural Center, Belgrade Youth Center, Museum of Yugoslav Archive and Art Cinema in Kolarac’s. In Novi Sad, screenings will be held at the Novi Sad Cultural Center, and in Cineplexx cinemas in Niš.

Tickets for the Opening Ceremony, for Aretha Franklin: Amazing Grace and the premiere of Diary of Diane B, can be purchased today at the Kombank Hall and Tickets service!

This year’s festival was supported by the Media Creative Europe, Ministry of Culture and Information of the Republic of Serbia, Secretariat for Culture of the City of Belgrade, Reconstruction Women’s Fund, French Institute, EU Info Center.